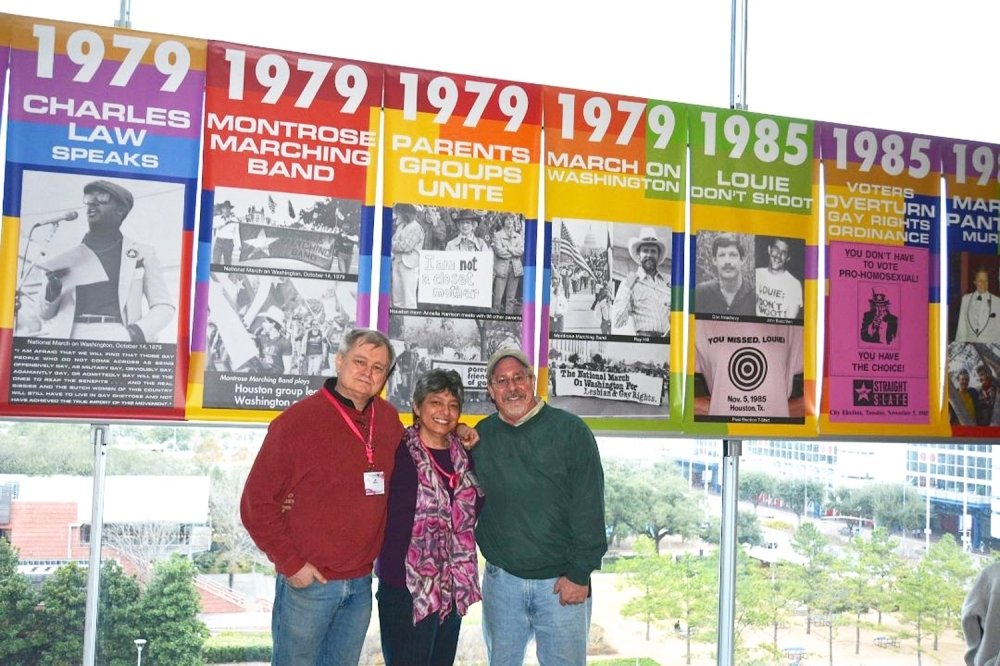 (From right) JD Doyle, Sara Fernandez and Kirk Baxter are the founders of The Banner Project. (Courtesy Kirk Baxter)

When Kirk Baxter first agreed to help create a series of banners honoring Houston’s LGBTQ history in 2014, he only had two weeks to do it. A national convention at the George R. Brown convention center was approaching and with it, members and leaders of LGBTQ communities from across the U.S. By the time of the event, Baxter had prepared 27, 3-foot wide banners highlighting the history of pride and activism in Houston.

“I am a self-employed graphic designer and I was really busy at the time so I kind of hemmed and hawed but eventually I said, ‘okay I’ll do it,’” Baxter said. “I don’t want to pat myself on the back but it was pretty monumental. People would walk in… and they were just dumbfounded by how it turned out. They were so happy and surprised.”

Since the convention the effort, known as The Banner Project, has grown to 48 banners that are stored at the University of Houston MD Anderson Library. The university displays them during pride month and lends them to organizations and businesses for temporary installations throughout the year. In recent months the banners have been on display at Minute Maid Park, the Toyota Center and will soon head off for an exhibit at Texas A&M.

While researching and working with the founders of the project, Sara Fernandez and JD Doyle, Baxter said he learned more than he expected about his own community’s history.

“I’m pretty proud of the fact that this was a huge learning experience for me,” he said. “People doing things in the community back in the ’60s and ’70s were able to grow with Houston and become the mayor and judges and people that had real influence on politics and the city.”

Although the banners’ subjects, both individuals and significant events, span the city of Houston, many of them tie back to Baxter’s own community of Montrose. As the neighborhood that once served as a LGBTQ safe-haven faces rapid redevelopment, Baxter said he hopes the banners will serve as a testament to Montrose’s importance in Houston’s history.

“Houston is so diverse and welcoming of people from all over the world, but it was important to us that people realize that the gay community contributed and has been a part of the development of this city,” Baxter said.

The Texas Two-Step: Barbeque and Wine