July 4, 1776, the United States of America declared its independence from the most powerful nation in the world, Great Britain.  Most of the known world thought our Founding Fathers were out of their minds.  How could the people ever be trusted to govern themselves?  Mr. Washington, Mr. Adams, Mr. Jefferson, Mr. Madison, Mr. Hamilton and Mr. Franklin were fools.  Did they actually believe they could win?  Did they truly believe the common person could be trusted to vote for their leaders?

We all know what happened. Those “foolish” men created the most free, most prosperous, most tolerant nation in human history.  The entire world heard the call in the words engraved on the Statue of Liberty, “Give me your tired, your poor, your huddled masses yearning to be free.” People came. They are still coming.

There are so many things about our country that make my heart beat so strongly it feels as if it is going to explode from my chest: Coming home and seeing my beautiful wife after six months in the Persian Gulf, hearing Jim Lovell say, “Houston, 13” when the damaged Apollo 13 capsule came through the fire of reentry to splashdown safely, Al Michaels shouting, “Do you believe in miracles? YES!” as our hockey team beat the vastly superior Soviet Union hockey team in the 1980 Lake Placid Olympic Games.

Another patriotic moment I’ll always cherish is watching 27-year old Whitney Houston belting out our national anthem at Super Bowl XXV in 1991.  Here is the video of Whitney if you are too young to remember:  https://youtu.be/dtdhxqGmWKU 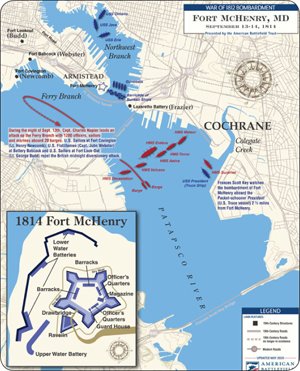 The American Battlefield Trust’s map of the Bombardment of Fort McHenry.
https://www.battlefields.org/learn/maps/fort-mchenry-september-13-14-1814

The Star-Spangled Banner is our national anthem.  The music came from a popular English drinking song, To Anacrenon in Heaven. No kidding. The lyrics were written by American Francis Scott Key.  Some days during the twelve years I served in the United States House of Representatives, I felt “The Shining City on a Hill” that America always aspired to be was transforming into an old house in a flood zone. Congress was a hyper-partisan group who refused to compromise and loved to fight. In a 2013 poll by Public Policy Polling, more Americans had a higher opinion of root canals than Congress.  It wasn’t close.  Root canals 56%, Congress 32%, Not sure 12%.  On the bright side, Congress whipped meth labs 60% to 21%. It is sometimes difficult to be a member of a group held in such high esteem by your bosses, the American people.

During these moments, I would remember the story of Francis Scott Key, and the creation of The Star-Spangled Banner.  It is a remarkable story of love for the United States of America.  Every time I hear the song, I try to put myself in Key’s shoes.  He was born in the middle of the American Revolution – August 1, 1779.  His parents were British subjects.  He was always an American. The British never got over the fact American revolutionaries broke away from King George’s tyrannical rule. The British kept hassling and seizing our trade ships overseas and imprisoning American sailors. On June 18, 1812, we formally declared war against Great Britain. The War of 1812 had begun. 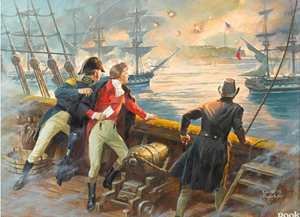 Once again, we were fighting the most powerful navy and army in the world.  And just like the Revolutionary War, we lost all the initial battles.  On August 24, 1814, the British captured Washington, D.C. and burned our Capitol Building and the White House to the ground. Their next target was one of our greatest ports – Baltimore.  One of Key’s friends had been arrested by the British invaders.  Key went to the flagship of the British fleet in Chesapeake Bay to negotiate his release.  It was a success, but the British would not let Key and his friend leave.  They knew Baltimore was going to be attacked, and that information must not be allowed to leak to the Americans.  So, Key and his friend were put on a “truce ship” in Baltimore Harbor.  The key to capturing Baltimore was taking Fort McHenry.  The British kindly gave Key a “front row seat” for the destruction of Fort McHenry.  The fort could be seen from Key’s “truce ship.”  He could see the huge, 30 feet by 42 feet, flag flying over the fort. Key knew as long as that flag was flying, the Americans were winning the battle. 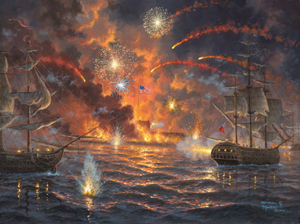 On September 13, 1814, during daylight hours in the rain, the British fleet started pouring artillery shells down on Fort McHenry.  Key could see and hear the explosions over the fort.  Our flag was tattered, but it was still flying. The sun began to set.  To immortalize what he was feeling and what he was seeing, Key wrote “What so proudly we hailed, at the twilight’s last gleaming. Whose broad stripes and bright stars, through the perilous fight.  O’er the ramparts we watched, were so gallantly streaming.”

As darkness set in, Key was bracing for a sleepless night, waiting for dawn to see if our flag was down and Fort McHenry captured. God/fate was with Key that evening. The British bombs illuminated the night sky when they exploded.  With every explosion, Key had one or two seconds to see if our flag was still flying over Fort McHenry. To describe his sleepless night and his pride in America, Key wrote, “And the rocket’s red glare, the bombs bursting in air, gave proof through the night that our flag was still there.” 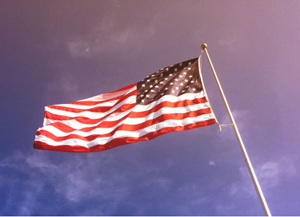 As the sun rose, Key could clearly see Old Glory standing tall. The British withdrew. Baltimore would not be captured.   “Oh, say does that star-spangled banner yet wave.  O’er the land of the free, and the home of the brave.”  America would win the War of 1812, and we would forever have the most beautiful, inspiring and glorious national anthem the world has ever known!

On the 4th of July, while you are enjoying hot dogs, hamburgers, fajitas, potato chips, ice cream and fireworks shows with your family, you will undoubtedly hear The Star-Spangled Banner.  All I ask is that you stand. if possible, take off your hat, put your right hand over your heart, reflect on the words of that sacred song, and sing our national anthem as loudly and proudly as you can.