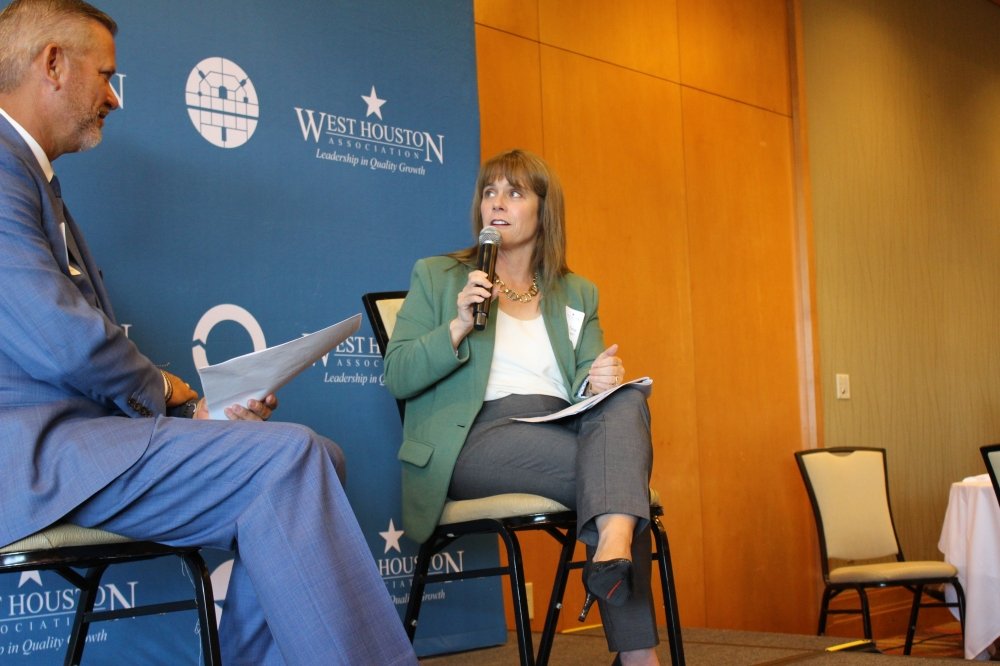 WHA—a nonprofit organization of major developers, engineering firms and other industry leaders with a stake in infrastructure and relevant public policy—hosted its seventh annual flood control forum against the backdrop of the upcoming fifth anniversary of Hurricane Harvey.

Below are some main points of discussion from Petersen’s presentation and the subsequent Q&A session moderated by Tim Buscha, president of IDS Engineering Group—an engineering consulting firm and WHA member.

Petersen updated forum attendees on current and completed work on the district’s two frontier programs in Little Cypress Creek and Upper Langham Creek. The frontier programs aim to get ahead of development and form detention basins at a regional level rather than at an individual developer level.

“The goal is to work collaboratively with the development community so that we can pose regional solutions rather than having individual ponds throughout the county,” Petersen said in her presentation. “What that provides is an opportunity to do recreational amenities at regional basins… and centralize those stormwater and flood control benefits.”

To participate in the program, developers pay a $4,000-per-acre “impact fee” to develop in a watershed service area and must also excavate part of a regional drainage facility, according to the HCFCD’s website. From there, Petersen said the district uses the impact fees to acquire right of way for the basins.

According to the 2018 master drainage plan for the Little Cypress Creek frontier program, right-of-way acquisition accounted for $100.77 million, or 16%, of the estimated total cost of construction.

The HCFCD’s MAAPnext monthly update to Commissioners Court on Aug. 2 showed the Federal Emergency Management Agency was 20% of the way toward releasing preliminary flood insurance rate maps this summer or fall. Petersen said residents should expect significant changes to the updated flood plain maps, which use new Atlas 14 rainfall data from the National Oceanic and Atmospheric Administration.

“Our [current] flood plain maps are based on a 13-inch [rainfall] event. It’s going to shift to an almost 18-inch event,” Petersen said. “And so that’s really going to impact a lot of folks who don’t think that they’re in the flood plain right now.”

Petersen urged WHA members to be aware of the flood plain map changes and how they could affect development projects.

Petersen cited the potential $30 billion underground flood tunnels as an example of a “transformational solution” the district is considering to bolster its more routine projects.

In response to a question from Buscha about progress on the tunnel study, Petersen said the district is moving toward Phase 3 and would need to work with the community to assess the need and desire for a project of this magnitude. She asked WHA members to give HCFCD input from their organizations and constituencies.

WHA members asked additional questions about the tunnels, including how their cost efficiency compares to other construction projects. Petersen said tunnels “compare very favorably” with traditional approaches like channel widening and stormwater detention, but noted they have a large upfront cost.

“The way that the district has approached our work in the past is to do those incremental projects where we could begin to see benefit quickly, but [they] require a whole lot of little bites at the apple,” Petersen said. “The tunnel is a big bit of the apple.”

The Texas Water Development Board offers grants for flood mitigation through its flood infrastructure fund, which was established through Senate Bill 7 in 2019 and the $793 million contained in Senate Bill 500, according to TWDB’s 2022 State Water plan.

According to Petersen, the fund is not fully funded through the next legislative session. She said it will be important to discuss the methodology for doling out funding during the session, adding that she had previously provided testimony on July 12 to the Texas House of Representatives Appropriations Committee on the unintended consequences of the criteria set by the TWDB for accessing its flood infrastructure fund.

“The type of policies that are in place—they really begin to undervalue the density that we have in Harris County,” Petersen said. “[The methodology] doesn’t recognize the full benefits of our projects.”

Buscha added the WHA “has the ear” of state legislators and that funding would be a key element for potential flood control projects and to serve the West Houston community.

TWDB will also be responsible for administering a statewide flood mitigation plan by 2024; on July 14, the San Jacinto Regional Flood Planning group submitted a draft plan for Region 6, which includes Harris, Montgomery and other Houston-area counties.

7 events to attend in the Katy area during June, July