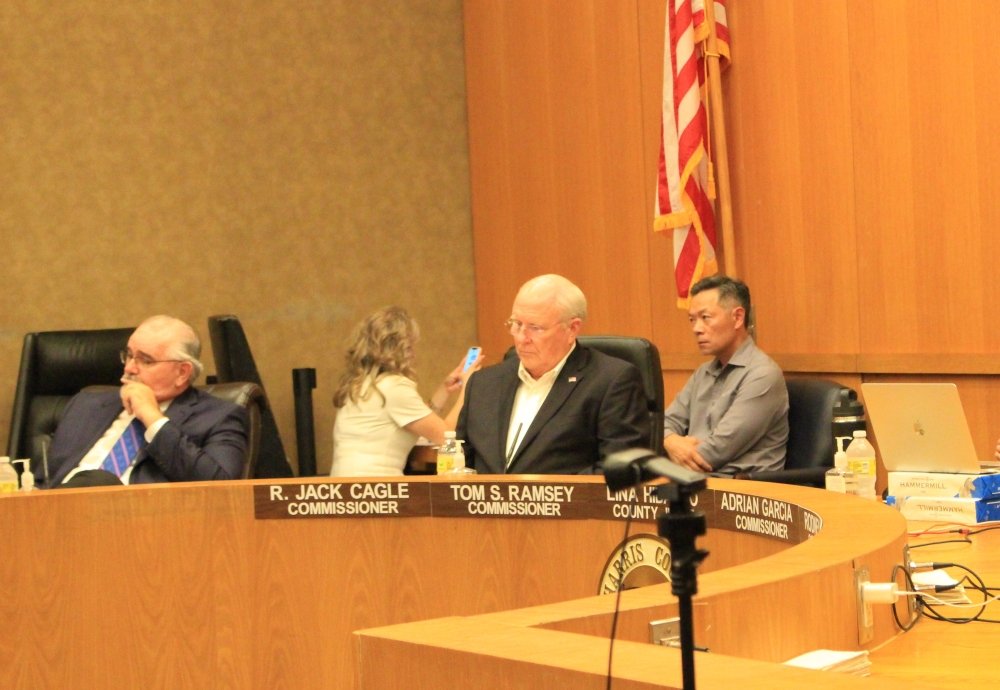 Members of Harris County Commissioners Court voted 3-2 to place a $1.2 billion bond on the November ballot during a special session Aug. 18.

The vote cements the 3-2 split vote from the Aug. 2 meeting of Commissioners Court, with Precinct 3 Commissioner Tom Ramsey and Precinct 4 Commissioner Jack Cagle again opposed to the bond issue.

Voters will vote on the three key areas—$900 million for roads, drainage and multimodal transportation; $200 million for parks; and $100 million for public safety facilities—in separate bond referendums. The county bond will appear on the same ballot for voters who live in city of Houston, which approved an ordinance Aug. 17 for a $478 million public improvement bond.

Based on estimated 2022 tax values, the average homeowner would pay an additional $31 a year in property taxes, according to Daniel Ramos, executive director of the Office of Management and Budget.

County Judge Lina Hidalgo said residents would not feel the effect of the bond on their taxes until the levy is imposed well into next year, likely towards the end of 2023.

“We’re mindful that we’re dealing with inflation right now,” Hidalgo said. “I believe we have a responsibility to lead the efforts to improve our infrastructure today and for the future, [and] this bond is very important in order to be able to keep the level of service that people have come to expect from Harris County.”

At the Aug. 2 meeting, the court voted 3-2 to adopt guidelines to allocate bond funding using a “worst-first” approach to direct funds to areas of greatest need.

Under these guidelines, each precinct would receive a minimum of $220 million of the $1.2 billion, while $100 million would be reserved for public safety facilities regardless of their location. That leaves $220 million for distribution based on need, Hidalgo said at the Aug. 2 meeting.

Ramos said as the county continues to pay off its debt from the previous bond and as property assessments increase, the overall tax rate for residents would not increase.

“The combination of those two things will mean taxes for Harris County residents will continue to go down over the next decade, barring something unforeseen,” Ramos said.

Opposition to the bond

Referencing the budget the OMB will propose at the regular meeting of Commissioners Court on Aug. 23, Ramsey said the county could use $1.7 billion in commercial paper interest—a form of unsecured, short-term debt—and delay a vote on a bond issue until next year.

According to Ramos, the interest rate for commercial paper interest would be less than a quarter of a percent, but in most instances is used as short-term financing. In contrast, the $1.2 billion bond would be paid off over 25 years if approved, according to background information in the agenda provided by the Office of County Administration.

Precinct 1 Commissioner Rodney Ellis made a motion to end debate 45 minutes into the meeting, which passed 3-2 with opposition from Ramsey and Cagle.

“We are going to, at 3:20 in the afternoon, squelch discussion and debate when we have been at 2 o’clock in the morning discussing other matters before, but we’re dealing with a big bond issue?” Cagle said.

Precinct 2 Commissioner Adrian Garcia said commissioners had the opportunity over the last few months to engage with the budget office and other departments.

“To be here at this late hour trying to do some work that could have been done months and months ago—several weeks ago, we all had an opportunity to ask questions,” Garcia said.

Commissioners will likely vote on official polling locations for the bond during their court meeting on Aug. 23, according to First Assistant County Attorney Jay Aiyer.

H-E-B to require employees, ask customers to be masked despite upcoming expiration of governor’s mandate