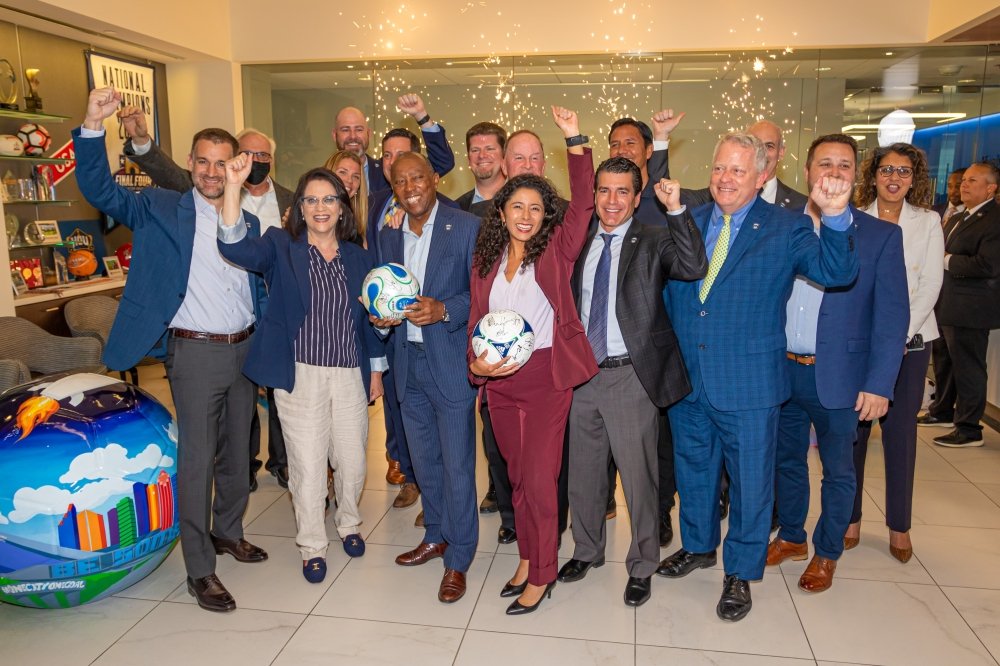 The eyes of the world will be on Houston in four years when the city begins hosting 2026 FIFA World Cup matches.

NRG Stadium was announced June 16 as one of 16 North American venues to host games of the prestigious international football tournament.

Houston’s selection completes a successful four-year journey by a bid committee that sold FIFA on not just the structural advantages of NRG Stadium, but also the culture of one of the most diverse cities in the U.S.

The selection is a landmark moment for a city that has already hosted three Super Bowls, three National Collegiate Athletic Association Men’s Final Fours—with one more on the way next year—as well as the College Football Playoff National Championship set for 2024.

In all, 60 matches with a 48-country field are planned for the “United 2026” World Cup, which will be hosted by three countries for the first time in tourney history.

While a match schedule is still yet to be announced, Houston is likely staging five or six matches total.

FIFA cut the final 16 venues from a pool of 23 U.S., Mexican, and Canadian cities.

Other than Houston, the other host cities include:

The cities were revealed by regions: east, central and west. Houston is a central region host city.

Houston committee chief was confident before the win

This will be a month-long tournament that billions of people will watch all around the world. Now that Houston is selected, the city is hosting the equivalent of up to six Super Bowls.

The city of Houston has been preparing for this since 2018, when FIFA awarded the World Cup to North America.

The city pitched the facilities in and around NRG Stadium, along with the vibrancy of our community, to convince FIFA to accept the bid.

“People have been asking me if I’m losing sleep. The truth is I’m sleeping real well at night right now, because I know we’ve done everything within our power. We answered every call. We responded to every test. We aren’t missing any elements right now or falling short or weak in any area. It was really a great collective effort from our community to really unite,” said Chris Canetti, president of the Houston World Cup Bid Committee, speaking to ABC13 on June 15.

Canetti said another advantage is the retractable roof at NRG Stadium, which means the matches are guaranteed to go on schedule regardless of summer heat or storms.

“In line with the previous stages of the FIFA World Cup 2026 selection process, any announcement will be made in the best interests of football, taking into consideration the needs of all stakeholders involved, as we aim to lay the foundations for the tournament to be delivered successfully across all three countries,” said Victor Montagliani, FIFA vice president and president of the Confederation of North, Central America and Caribbean Association Football.

Canetti said being a part of something like this is huge for Houston.

“We don’t want to just have soccer games come through here and that be the end of the story. We want to make sure this event, and other sporting events that come to Houston, help make Houston a better place for its residents. So, we believe the World Cup, the most popular and prestigious sporting event in the world, will enable us to leverage lots of opportunities in and around the market,” Canetti said.

Cities in the U.S. will reportedly host from the quarterfinals on.

Board of Trustees Call for May Bond Election